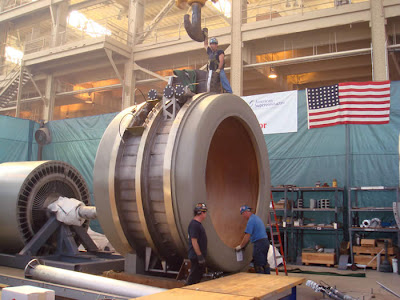 Incorporating coils of HTS wire that are able to carry 150 times the power of similar-sized copper wire, the motor is less than half the size of conventional motors. It will help make new ships more fuel-efficient and free up space for additional war fighting capability.

This system was designed and built under a contract from the Office of Naval Research to demonstrate the efficacy of HTS motors as the primary propulsion technology for future Navy all-electric ships and submarines. Naval Sea Systems Command (NAVSEA) funded and led the successful testing of the motor.

The Navy has invested more than $100 million in the development of HTS technology, paving the way not only for use in Navy ships but also in commercial vessels, such as cruise liners and liquefied natural gas (LNG) tankers, which can also take advantage of the space and efficiency benefits of HTS motors.

Load testing demonstrates how a motor performs under the stresses and operating conditions it undergoes when powering a vessel at sea. This final development stage of the motor provides engineers and ship propulsion integrators with vital information regarding design options and the operating characteristics of the new superconductor motors.

Significantly, the HTS motors being developed by American Superconductor involve no major changes in fundamental motor technology. The machines operate in the same manner as conventional motors, gaining their substantial advantages by replacing copper rotor coils with HTS rotor coils. The rotors of HTS motors run “cold,” so they avoid the thermal stresses experienced by conventional machines during normal operation. The inability to achieve proper thermal management has been a key impediment in developing power dense, high torque motors required for naval and commercial marine applications. Stresses caused by heat in other advanced, high power motors often necessitates costly motor repair and refurbishment. 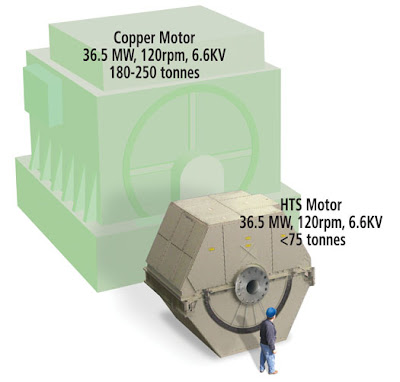 The 36.5-MW (49,000 horsepower) HTS motor does 120 rpm and produces 2.9 million Newton-meters of torque. The motor is being specifically designed to provide propulsion power for the next generation of Navy warships. A motor of this scale also has direct commercial application in large cruise ships and merchant vessels.

As an example, two 44-MW conventional motors are used to propel the famous Queen Elizabeth 2 cruise ship. These motors each weigh over 400 metric tons; the 36.5-MW HTS motor will weigh approximately 75 metric tons.