The world’s most powerful X-ray laser has begun operating at a facility where scientists will attempt to recreate the conditions deep inside the sun and produce film-like sequences of viruses and cells.

The machine, called the European X-ray Free Electron Laser (XFEL), acts as a high-speed camera that can capture images of individual atoms in a few millionths of a billionth of a second. Unlike a conventional camera, though, everything imaged by the X-ray laser is obliterated – its beam is 100 times more intense than if all the sunlight hitting the Earth’s surface were focused onto a single thumbnail.

The facility near Hamburg, housed in a series of tunnels up to 38 metres underground, will allow scientists to explore the architecture of viruses and cells, create jittery films of chemical reactions as they unfold and replicate conditions deep within stars and planets.

Scientists are already engaged in a fierce competitive bidding process to be the among the first to get time on its six beamlines.

“The laser is the biggest, and the most powerful, source of X-rays ever made,” said Olivier Napoly, a member of the French Atomic Energy Commission who helped build the complex.

XFEL is the world’s third major X-ray laser facility – projects in Japan and the US have already spawned major advances in structural biology and materials science. The European beam is more powerful, but most significantly has a far higher pulse rate than either of its predecessors.

“They can send 100 pulses out per second, we can send 27,000,” said Robert Feidenhan’l, chairman of the European XFEL management board.

This matters because to study chemical reactions or biological processes, the X-ray strobe is used to capture flickering snapshots of the same system at different time-points that can be stitched together into a film sequence.

At XFEL, scientists will be able to collect data at a far quicker rate and miss less of the action between shots.

Allen Orville, who runs the XFEL hub at the UK’s Diamond Light Source, is among the first users who will start data collection in two week’s time. Orville is focused on understanding the molecular mechanics of how enzymes make antibiotics, such as penicillin, with the ultimate goal of being able to develop new ways to produce antibiotics in the future. 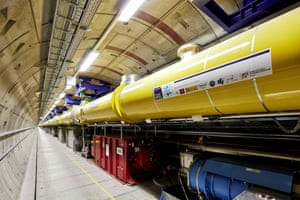 Previously, scientists have been able to measure the crystal structure of the beginning and end-products. But, according to Orville, this is like trying to understand an Olympic high-jump contest based on pictures of the athlete on the bench before the jump and lying on the mat afterwards.

“We’re trying to get the enzyme at the top of that high bar,” he said. “We hope we’ll be able to see the very complex reaction cycle including some of the short-lived intermediates that have never been seen before.”

Another planned experiment will aim to reveal the process by which molecules capture light and turn it into energy during photosynthesis. “You might use that as an input to make an artificial device to do the same,” said Feidenhan’l. “That’s my dream.”

The centrepiece of the facility is the world’s longest – a mile long superconducting linear accelerator, designed to provide the energy needed to generate X-ray flashes a billion times brighter than the best conventional radiation sources. The tunnel’s temperature is kept at 2C above absolute zero.

The electrons are then beamed between a series of magnets that send them on slalom-like path, where at each wiggle they emit X-rays, which coalesce into an intense laser beam.

The wavelength of the X-rays is about 0.05 nanometres, comparable to the radius of a hydrogen atom. It hits the target and the resultant scattered radiation, picked up by detectors, reveals the sample’s internal structure – just before it is destroyed.

XFEL will also house a powerful optical laser to go alongside the X-ray gun, which scientists will use to exert extraordinary pressures on materials in order to reproduce conditions similar to those at the centre of the Earth or inside the Sun – or simply to morph materials into previously unseen configurations.

Justin Wark, a professor of physics at the University of Oxford, said: “The pressures you can produce are enormous; 10 million atmospheres and above, which is more than three times the pressure at the centre of the Earth.”

Wark and others will use the dual laser setup to blast samples with the optical light and then take a picture with the X-ray beam to address previously unanswerable questions.

“It’s still not resolved exactly what the centre of the Earth might look like,” said Wark. “You could also study the melting point of iron up to pressures relative to much larger planets.”

Extremely high pressures, theory predicts, could also produce entirely new materials, including a new form of diamond with a crystal structure that would make it even harder than the conventional kind.

Scientists are also planning to harness the X-ray beam’s tremendous heating effect – the focal region can reach 200 million degrees within a millionth of a billionth of a second.

Wark believes this will allow XFEL to investigate processes within the sun, such as how radiation makes its way from the centre to the surface. “How the X-rays leak their way out until finally you just see optical radiation depends on how opaque the sun is at each point,” he said. “People are wanting to make little slabs of matter that look a bit like the Sun and see how transparent they are.”