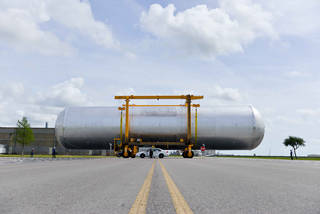 NASA’s Space Launch System (SLS) rocket will launch crew and massive amounts of cargo to deep space including missions to Mars. Before launching the world’s most powerful rocket the first time, each part of SLS must undergo numerous tests to ensure the rocket and its components have been designed, manufactured and integrated to withstand the stresses of launch. 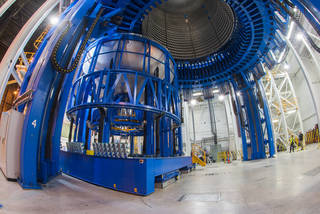 This image made earlier of another liquid oxygen tank being manufactured for weld confidence testing shows how domes are added to make tanks in the Vertical Assembly Center at NASA’s Michoud Assembly Facility in New Orleans. A dome is positioned in a feeder, left, and is added to the barrel at the bottom of the assembly Center, right. Two domes, two rings, and two barrels are joined to make a liquid oxygen fuel tank for the Space Launch System.
Credits: NASA/MSFC Michoud image: Steven Seipel

The heavy-lift rocket for the first integrated flight with the agency’s Orion spacecraft is a foundation for all future SLS configurations. NASA recently completed a major test series on hardware for the upper part of the rocket. A test article of the rocket’s core stage engine section is on its way by barge to NASA’s Marshall Space Flight Center in Huntsville, Alabama, for a qualification test series. The engine section is the first of four core stage test articles manufactured and is designed to the specifications needed for launch.

“Completing these SLS structural tests puts NASA one step closer to the launch pad,” said John Honeycutt, the SLS Program manager at Marshall. “Our upcoming core stage testing will continue the largest testing campaign for a NASA rocket since the space shuttle.” 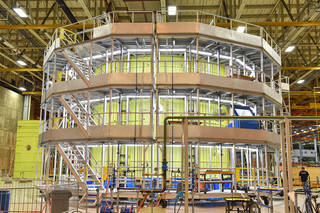 The intertank to be flown on the first integrated flight of the Space Launch System and Orion is nearly finished and will soon undergo application of thermal protection systems at NASA’s Michoud Assembly Facility in New Orleans. The intertank is located between the core stage liquid oxygen and liquid hydrogen tanks. It is the only piece of the core stage that is made by bolting pieces together, rather than by welding. It is the thickest core stage structure because it has to be strong to withstand the forces of the solid rocket boosters attached to it.
Credits: NASA/MSFC Michoud image: Judy Guidry

While NASA is making significant progress overall with SLS to prepare for deep space exploration, the agency is overcoming production delays at Michoud due to tornado damage and the learning curve for first time operations. As schedules are adjusted to account for tornado recovery, the processes for friction stir welding are also under evaluation to validate performance of the weld process over time. This assessment will help engineers to duplicate their process for long-term production, and will ensure flight hardware made-to-date is consistent with requirements.

During recent manufacturing of the liquid oxygen tank test article in Michoud’s Vertical Assembly Center, the rear or aft dome was inadvertently damaged during pre-weld preparations. This occurred before the dome was welded to the rest of the test article. NASA and Boeing formed independent mishap investigation teams to evaluate the incident. No personnel were injured, and assessments are ongoing to ensure this doesn’t happen again.

“Small things from the tiniest screws to each weld matter,” said Honeycutt. “Our engineers are learning as we work with Boeing to tackle challenges from aligning robotic weld machines off by as little as the width of a paperclip to addressing the fact that tiny threads on welding pins affect weld strength. We’re working together to ensure critical flight hardware is handled safely in the factory and as it is moved thousands of miles by ships, trains, and planes.”

New tools and techniques
Making a world-class evolvable rocket for the first time is challenging, Honeycutt added. The 212-foot-tall core stage uses four RS-25 engines to power SLS, and is the largest rocket stage NASA has ever manufactured and it will power all SLS rocket configurations. The agency is using innovative tools and new techniques and processes not only to build SLS, but also to transport it inside and outside the factory at NASA’s Michoud Assembly Facility in New Orleans.

“We are advancing U.S. leadership in manufacturing while building and testing a powerful rocket that meets the quality and safety criteria needed to take humans farther in space than we’ve ever traveled before,” said Honeycutt.

NASA and Boeing, the agency’s prime contractor for SLS, have done extensive work to develop weld parameters and processes for making the first-of-their-kind large fuel tanks.

“Production of the fuel tank pushes the state-of-the-art for self-reacting friction stir welding of thicker materials,” said Steve Doering, the SLS stages manager at Marshall. “This is the first time robotic self-reacting friction stir weld technology has built such large rocket parts with thicker joints. We’ve learned a lot as we work through processes to get weld parameters for the large fuel tanks adjusted to produce high-quality welds that can withstand the extreme forces of launch and spaceflight.”

By establishing repeatable manufacturing processes now, NASA will evolve SLS to meet a variety of mission needs as America moves deeper into the solar system. All the work done across the country now will support for the agency’s series of planned missions beyond the moon in the future.

World’s most strongest rocket & World’s most powerful rocket Manufacturing is complete on the liquid hydrogen tank structural qualification test article, shown here. It is being prepared for shipping to NASA’s Marshall Spac...
9.3
Average User Rating
2 votes
Have Your Say!
Your Rating: 0
Submit