This is the newest class of destroyers in the Japanese Maritime Self-Defense Force (JMSDF). Built with a high level of indigenous technology, they complement the larger and more capable Atago and Kongo class AEGIS destroyers in service. Their main role is to serve as armed escorts for the JMSDF helicopter carriers. At 6800 tons, they are basically in the same league as a modern European frigate, but Japan classifies them as a destroyer due to its comprehensive weapons and sensor suite. As of now, there are 4 ships of this class, with the final one commissioned in 2014. 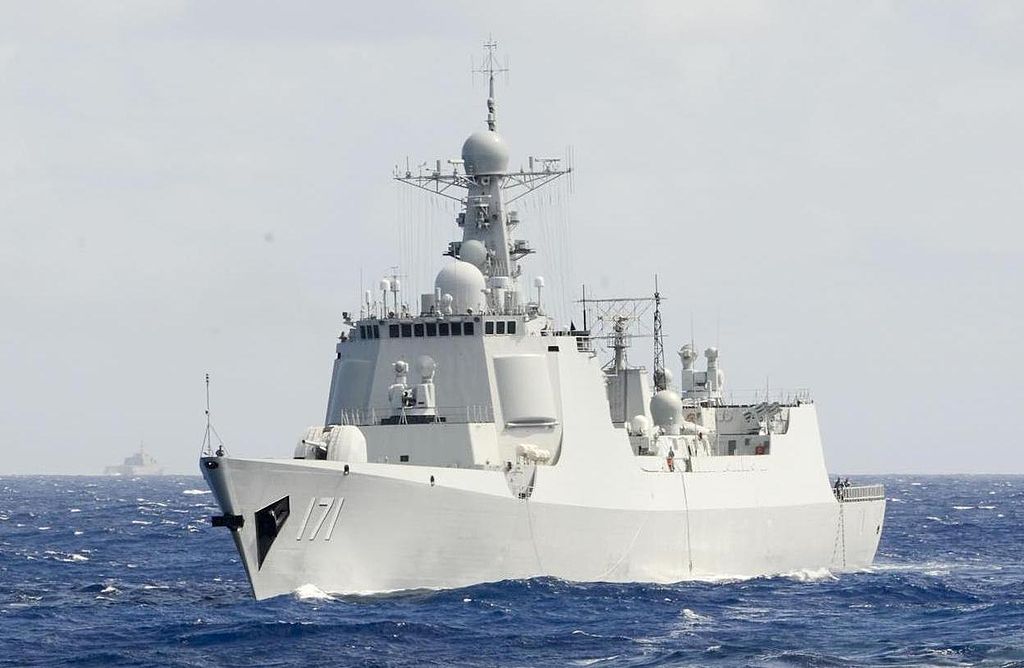 Often dismissed as a Chinese knockoff of the American AEGIS destroyers, the Type-52C is completely unique and has no similarities with its American counterpart. These 7000-ton ships were built to test several new technologies like electronically scanning radars, long-range SAM system, land attack capability, indigenous closed loop CIWS and a new hull design. These features make the Type 52C a formidable opponent and laid the pathway for the future Type 52D destroyers with many more refinements and upgrades. This ship class basically heralded the entry into the era 21st-century technological warfare for the PLAN.

Developed as a replacement for the Type 42, the Type 45 program was initially conceived as a 1 for 1 replacement for the 12 Type 42 destroyers. In the end, only 6 ships were built due to budget cuts and other issues and they serve as the sole destroyer class. These ships have cutting edge weapons and sensors as well as a high degree of automation, which reduces the crew requirement. Though at 8000 tons, these ships could have been made into multirole platforms, the Royal Navy chooses to give them only anti-air capabilities.

Its anti-surface capabilities will be negligible after the retirement of the Harpoon in 2018. The Sylver VLS farm in the front reportedly has space for the addition of 12 more A50 vertical launch cells for SAMs or A70 cells for the Scalp cruise missile. It will be interesting to see if the budget cuts allow the RN to deploy land attack cruise missiles on their primary air defense warship. It is interesting to note that this is the only single-role warship on this list.

Propulsion: The Type-45s have a very advanced Integrated Electric Propulsion (IEP) system. It consists of diesel-electric propulsion combined with gas turbine propulsion to achieve maximum power and efficiency. The engines generate electricity, which runs the motors, which in turn turns the propellers.

Having its origins as a pan-European program consisting of the UK, France, and Italy, the Horizon common frigate program originally called for 22 air-defense ships to be built, with 12 for the Royal Navy, 4 for the French Navy and 6 for the Italian Navy. But things were just not destined to be this way, with the UK withdrawing from the project due to disagreements regarding which company would lead the project, cost, technical issues and the number of ships for the French and the Italian navies being reduced to just 2 each.

However, France and Italy went ahead with the project by incorporating similar core weapons and sensors, resulting in the Horizon class ships we have today. Unlike the British solo-venture Daring class, which is capable of only anti-air warfare, the 7000-ton Horizons are multirole ships and can handle all sorts of threats including sub-surface ones. At present, they serve primarily in the anti-air role and are used as escorts for their carriers.

Developed under Project-15A, the Kolkata class are the largest indigenously designed and built surface combatants in India. They are equipped with a wide variety of equipment from countries like Italy (main gun), Ukraine (gas turbines), Israel (Jointly developed LR-SAM) and Russia (Jointly developed BrahMos), which gives it the advantage of having cutting edge technology from the east and the west, infused into an Indian platform.

Displacing 7500 tons, the Kolkata class is the most powerful warship class in the Indian fleet, and will soon be joined by 4 ships of the Vishakapatnam class, which will have a similar configuration and capabilities with minor improvements. All 3 ships of the Kolkata class will be deployed with the Indian Navy’s Western fleet and will also serve as an escort for their carrier, INS Vikramaditya. These ships are built with plenty of room for additional upgrades and improvements in the future and have a large crew due to the presence of full-scale command and control facilities which enable it to act as the fleet flagship in the absence of a carrier.

Aviation: Hangar facilities for 2 x multirole helicopters. Seaking at present and Seahawk in the future.

The Royal Australian Navy is inching towards acquiring the coveted ‘Blue Water Navy’ status and the 6900-ton Hobart-class is just one type of asset that it is acquiring among others like 2 Canberra class LHDs (which can be used as mini-carriers with F-35B), 12 heavy diesel submarines and a fleet of next generation frigates. The Hobarts allow the RAN to provide a 600 km diameter protective umbrella while acting as a fleet escort, thereby bringing them up to the level of other top navies which have fielded similar air defense capabilities for some time now.

It is estimated that 3 Hobarts equipped with SM-6 missiles would be able to provide adequate air defense against threats encountered along their northern coast. This is a massive increase in capability, thanks to the advanced long-range radars and missiles on board. Though they have been marketed as AWD (Air Warfare Destroyers), they have some significant anti-surface and anti-submarine capabilities

The successor of the highly capable Type-52C destroyers, the 52D incorporates several significant improvements from guns, radars to missile launchers. These 7500-ton destroyers are being mass produced and are expected to form the core of the PLAN’s blue-water ambitions. The highlight of the ship is its Universal Vertical Launch System, which allows a single launcher to fire a variety of missiles ranging from surface to air, anti-submarine, anti-ship and land attack cruise missiles.

This technology, which was pioneered by the US, has now been perfected by the Chinese as well, making them the second country to do so (The VLS systems like UKSK and Sylver are not truly universal). These ships are expected to be further improved upon and the result is expected to be the all-powerful Type 55 destroyer. Recently, the 12th destroyer was launched and 1 of these destroyers has already been deployed as part of the Liaoning carrier battle group.

Cons: On paper, this ship doesn’t have any glaring drawbacks. Great job China.

The Atago class destroyers form the spearhead of the Japanese sea-based air defense with their advanced radars and long-range missiles. In the face of increasing missile threats from North Korea and Chinese adventurism near the disputed Senkaku islands, Japan is further committed to increasing the strength of their Atago class fleet from 2 ships to 4, with the new ships being equipped for exo-atmospheric ballistic missile defense. These 10,000-ton destroyers place a major emphasis on long range area air defense as the Japanese lack carrier based jets to do the job.

The Atagos are significantly larger than the Arleigh Burkes from which they derive their base design. There have been major changes to the ship however including superstructure design and VLS layouts, which easily distinguish it from the American Burkes. At present, the Atago class is more advanced and powerful than any Chinese warship, but it will soon be dethroned from this elevation by the arrival of the next generation Chinese missile cruisers. The Atagos noticeably lack long range offensive firepower which is in line with the defensive Japanese naval doctrine.

The Arleigh Burke class is the most successful destroyer class in the world, with 62 warships in service and 7 more under construction. The reduction in the number of Zumwalt-class destroyers to 3 from 32 is going to give a further boost to the Arleigh Burke class, as it is the only destroyer in mass production for now. The number of units is expected to swell to around 80 ships by 2025 with the induction of the improved Flight III ships.

Since their introduction in 1991, they have served in every theater of conflict for the US Navy and carried out escort missions, deterrence patrols, anti-piracy missions, ballistic missile defense duties, land attack, anti-air and HADR (humanitarian and disaster relief) missions, making it rich in terms of combat experience. These 9800-ton ships have powerful radars, a large missile armament, and continuous upgrades, which make them suited to handle any threat in any ocean in the world.

Surprise surprise! I know you didn’t expect South Korea to appear in the number 1 spot, but that is how it is. They have a massive shipbuilding industry, which can rival and outperform the ones in Europe and the US. These ships were built in a very short duration (around 2 years) and also possess the distinction of being the world’s largest destroyer, displacing a mammoth 11,000 tons when fully loaded. Based on the Arleigh Burke design, they have a comprehensive sensor and weapons suite which enables them to carry out basically any mission from cruise missile defense to attacking land targets 1500 km away to high-intensity anti-submarine warfare.

A single warship of this class can obliterate the entire North Korean surface, sub-surface fleet and pound targets deep within their territory without breaking a sweat. The powerful on-board radars are often used for tracking North Korean space and missile launches. 3 additional ships have been approved for construction to complement the existing 3 in service.

Cons: No secondary volume search radar. This is not an operational necessity for the South Koreans since their ships are not intended for overseas combat, but for mainland defense, and thus can be complemented by land-based radars and AWACS.

World’s most strongest Destroyers & World’s most powerful destroyers   10. Akizuki class [Japan] This is the newest class of destroyers in the Japanese Maritime Self-Defense Force (JMSDF). Built with a high level of indigen...
9.9
Average User Rating
7 votes
Have Your Say!
Your Rating: 0
Submit